This week I talked to a Freeze Framer.

I work in the television and Internet industry. Often times in the television and Internet industry, someone will have an opinion about someone else. When that someone has an opinion about someone else, and that opinion is a low opinion of said other person, and they decide they want to go ahead and express that opinion, they need an image that serves to help with the expression of that low opinion. When that happens, they call me and ask me to find one.

So you just look at every frame until you find the right one? That sounds difficult and time consuming and arbitrary.

In fact, though, it's not. It can be time consuming, sure. It can be somewhat difficult, yes. But it is not arbitrary.

The major categories and subcategories are all assigned letters of the alphabet, and the opinion is given a two to six letter classification called an "Identifier." I use it's Identifier to find another file that gives me some very specific instructions about the proper image to go with the opinion. Freeze framers have spent many decades—since long before digital media, in fact—identifying the proper combination of elements on a face for each Indentifier.

Can you give me an example?

Absolutely. Recently I was given an opinion about the man who hosted a reunion of a reality TV show that we will not name. I read the piece, and it was a classic "This person is an idiot because they are asking me to care about and pay attention to a group of people who do not deserve my attention." The Identifier for that sort of piece is BDCLE. (I've done quite a few of those recently.)

Here is the proper image for a BDCLE: 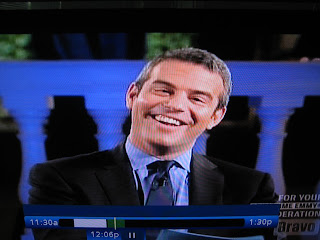 There are a few others, but I think you get the idea.

Is what you do "ethical?"

I reject the notion that ethics have anything at all to do with my job. I provide the image, yes, but I do not post it. I am a practitioner of an art form, not a participant in the consequences of that art form.

How does one become a Freeze Framer?

There are lodges in most cities in America. You simply have to go to one, meet a member or two, show them that you have the skills, the temperament, and the discretion to do what they do. You then become an apprentice.

The apprenticeship is two years, usually. After that, there is a ceremony.

I am not allowed to talk about it.

Should you be talking about this at all?

I would rather not respond to that question.

Is this interview an act of disloyalty on your part? Was it authorized by the Freeze Framers Lodge?

I will only say that I am a loyal Freeze Framer. But there is misinformation about us out there. I agreed to the interview to help dispel some of the myths. But, no. This interview was not authorized.

I will keep your identity a secret, then.

I appreciate that. Thank you.

There it is. A Freeze Framer. Something else you could be.

Also, come see Mary Miller and Jonathan Evison at The College Inn Pub, August 5 at 7pm. Aaron Burch will be there, too, to read from the brand spanking new issue of Hobart!

The best news I've heard in a while: Spike Jonze optioned the film rights to LIGHT BOXES by my friend Shane Jones. I loved LIGHT BOXES. You should buy it.

Here's a new one:

Year of the Liquidator.

RIP Merce Cunningham.
Posted by The Man Who Couldn't Blog at 4:41 PM No comments:

Email ThisBlogThis!Share to TwitterShare to FacebookShare to Pinterest
Labels: all the writers I love, freeze framers, john cage., readings

I thought maybe that because of the bad economy and the high unemployment rate here in the nation of the United States of America, it would be good for me to take a week or maybe two out of my nonstop schedule of entertaining in blog form—or, my nonstop schedule of attempting to but never really being able to entertain readers with a blog here on the internet—to instead use my nationally accessible forum to help out with the education of the people who are reading this and might also be unemployed.

Isn't that nice? Isn't it nice of me? I think sometimes that I am nice.

So I thought I could maybe use this blog post to highlight a possible career for those that are unemployed and maybe looking to find for themselves some kind of gainful and satisfactory employment opportunities.

Let's start by looking at a picture of this man: 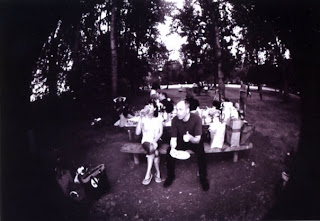 This man has a job. This man is a Regional Picnic Endorser. That is his title. That is what he does for a living. He lives in a region—the Pacific Northwest—and he attends many picnics in this region. He attends the picnics and evaluates them by following a six point rubric. He rates the picnic according to the rubric. And then, if the picnic scores a certain number of the six possible points, he endorses the picnic. And he endorses it by appearing in photographs making the "thumbs up" gesture.

This is his job. He is paid very well to do this job. He has benefits. And not just regular benefits. He has HEALTH benefits, which are, I think you know, some of the best kinds of benefits to get. People really covet health benefits.

He gets them because of his Regional Picnic Endorser position.

How did you get your job?

I sort of fell into it. I was at a park on a Saturday taking some photos and I saw a picnic. The folks who were putting on the picnic were very friendly and they gave me a hotdog with mustard. It was a nice stone ground honey mustard. I ate the hotdog and enjoyed it, and I gave the host the "thumbs up."

A man who was attending the picnic approached me and asked me to make the "thumbs up" sign again. I did so. He told me I was a natural. He gave me his business card and told me to call him Monday about a job. I was hesitant, but then he told me about the health benefits.

How long have you been doing this job?

Six years now. It's the longest I've ever held any job. I love it. So many hotdogs!

Tell me about the rubric. What are the six things a picnic must have to get the full six points?

I'm sorry, but I am not allowed to tell you. The six points are a closely guarded secret of our agency. If I told you, then everyone who was hosting a picnic would follow the six points specifically, but not try to innovate. It is important that Americans continue to innovate and shift the picnic paradigm internationally. We must remain Exceptionalists, re: picnics. We can't fall behind the Chinese or, say, the Brazilians.

How can someone get a job endorsing regional picnics?

You can stumble into it, like I did. Or you can go to your local government website. There are usually positions open, even if they are not listed. If you don't see one on the government jobs site, I would suggest calling Parks and Recreation directly and asking. Often, the person who answers the phone will pretend like the job doesn't exist. This is a test. Keep pressing them and eventually they will say, "Congratulations! Your persistence has earned you an interview!"

How many hotdogs have you eaten?

Many, my friend. Many.

Thank you for your time.

Blake Butler's Scorch Atlas is available for pre-order. Get in on dat shit.

Also, come see Mary Miller and Jonathan Evison at The College Inn Pub, August 5 at 7pm. Aaron Burch will be there, too, to read from the brand spanking new issue of Hobart!
Posted by The Man Who Couldn't Blog at 12:22 PM 1 comment: 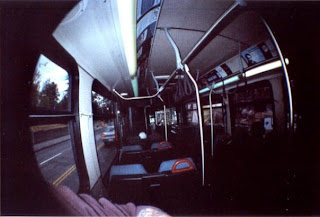 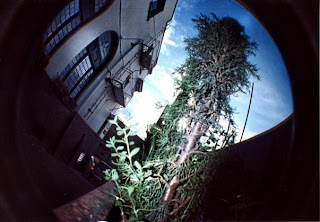 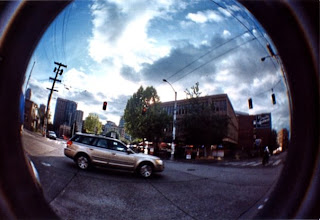 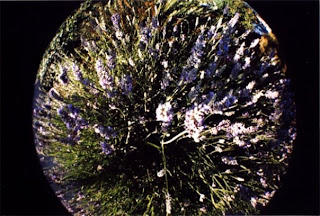 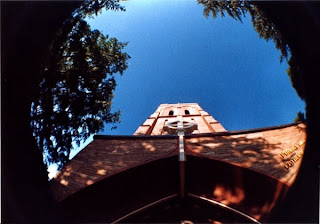 I have been away from my desk.

A new Happy Cobra eBook is coming soon. It's by Kendra Grant Malone and Tao Lin.

Also, come see Mary Miller and Jonathan Evison at The College Inn Pub, August 5 at 7pm.
Posted by The Man Who Couldn't Blog at 3:31 PM No comments:

File this under SOME OLD BULLSHIT. This is something I wrote in 2003 or 2004. I found it in a file somewhere. It's about my cat:

If Emmett were the mayor, I'd play a game of listening improvisation whenever he gave a speech. As he spoke, relaying whatever it was he wanted to relay, maybe something about the budget, maybe something about traffic, I would sit in a seat in back and play with the form. I could change his cadence by tapping my foot, pacing or confusing his tempo. He might suddenly speak polyrthymically, or stick with a simple 4/4 beat. I could rustle a few papers to stir the air and affect his pitch ever so slightly. I might cover an ear with my hand, listen to the way his voice changed when the sound is caught by only the left or the right. I could turn my head from side to side, listening to the difference in each angle. I'd open and close my hands around my ears to condense the sound waves into smaller spaces. Turn my head quickly (little doppler effect), making little rippling ponds, splashes of noise.

I might cover one eye to change my perspective, tilt my head to the side. Nod or shake. Squint, smile too hard, strain the muscles around my eyeball to squeeze it. Use my hands as blinders, press my thumbs to the sides of my face, making little trails of blue light, or green grids.

But, I don't think I'd mess with the content. Not at first. Just style and presentation.

If I taped Emmett's speeches, though, I could allow myself to mess with them. I might substitute words using homonyms, changing his meanings. I might transcribe entire speeches without vowels, or verbs. Cut up the text, put it in a hat, pull random bits and sort them into a new speech, studying that. I could intentionally mishear him. I could randomly add footnotes, or tangents. Or, I could fundamentally change the way I understand what Emmett says. I might try to override the hardwired pathways in my brain, forcing information through unused synaptic links. Or, perhaps I could make the pathways fire back wards? Parallel? A speech about the budget could be reconfigured, reassessed, and reinterpreted as a speech about divorce rates in ant colonies, or it could taste like limes and raspberries.

Later, we all found out that the center of the galaxy tastes like raspberries.

Here's a photo of Emmett about to teleport away. 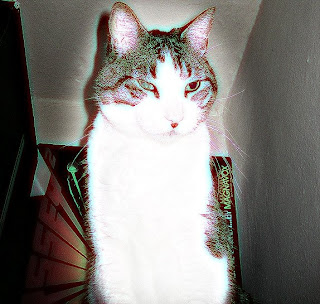 In Defense of Self-Portraiture
The Dr. Mario Champion

stuff i thought about today at work

• i practice no organized religion, but i do read strunk and white's "elements of style" nearly every day.

• if you come to my bookstore, i'm the guy at the kid's info desk with the temporary strega nona tattoo. don't point and laugh.

• the results of today's books-in-print olympics are as follows: garfield gets the gold with 312 results, ziggy the silver with 41 results, and jonas salk, the man who cured polio, gets the bronze with 32 results.
Posted by The Man Who Couldn't Blog at 3:00 PM 3 comments: