I met Adam Robison years back, but I met him on the phone. On the phone, I talked to Adam Robison about life and love and all sorts of other unsightly, embarrassing things.

After that, I wrote a letter to Mathew Simon.

Have you worked hard all these years? Is there something in the way of the door? Will Pluto ever become a planet again? Does this mean we no longer understand understanding? Where are you standing? Is it in in? Is it in out? Freedom means many things to many people. Does it mean any of those things to you?

I am for things. I am for socks. I am for raspberry bushes. I am for squirrels climbing up my window screens in the summer. I am for catching a fly in my fingertips. I am for buying new sunglasses and then losing those sunglasses.

Mr Simon, what about you?

Adam Robinson is featured on On Earth As It Is this week. Enjoy. 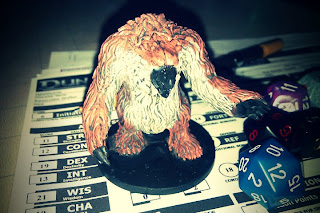 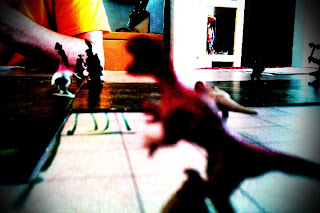 Other dangers
Posted by The Man Who Couldn't Blog at 12:05 PM No comments:

This is a true story. I wouldn't. I wouldn't make something like that up. It's true. True true.

I find that the border guards are not all that rude. When I was little, I once had a border guard between Canada and the US ask me if my dad had any computers or fresh fruit in the car. He had already asked my dad. Then he asked me. He assumed that I would rat out my dad.

This is a photo of me and my dad: 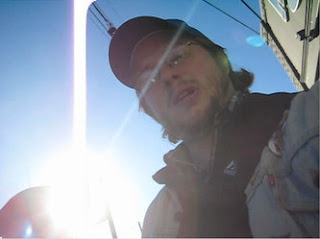 He probably does, at home. He probably has this stuff that they are asking about. But I don't really know for sure. I never ask and he never tells me. Plausible denial. Willful ignorance. Don't ask, don't tell. It's all game theory, here. Don't learn and you don't need to lie.

Canadians, though, are out to get my dad. It's because my dad is a floating ball of light.

Before I get to blogging, though, I need to confess. I have fresh fruit and computers.

I'll be reading at AWP in Denver. Here's a poster for one of the readings: 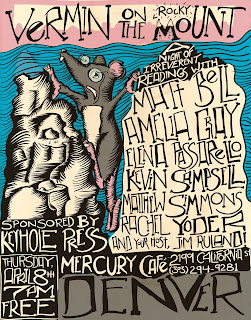 Here's a poster for another of the readings: 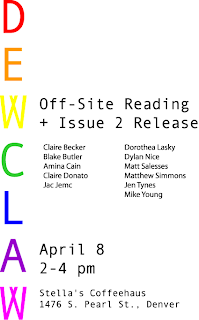 I also hope to do a reading in an elevator at some point. For Bust Down the Door and Eat All the Chickens. Details to come.

I talked about talk.

Some updates on A Jello Horse:

—A fourth printing is on its way. Cover.

—Another excerpt accompanies this interview with me.

—Reviewed along with my friend Travis Nichols's book Iowa here.
Posted by The Man Who Couldn't Blog at 9:47 AM 4 comments:

Reading tonight at Pilot Books.
Posted by The Man Who Couldn't Blog at 9:47 AM No comments: 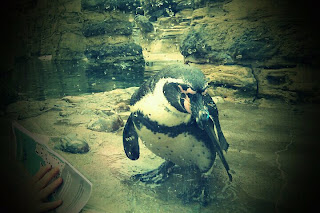 The following things are true about the lunch demon.

1) The lunch demon has a soul that is heavier than the souls of regular people. It is weighty. Weighty.

2) The lunch demon refers to himself in the second person. "You would maybe like to go out and get a pizza? Yes, you would. Will Bob come with?"

4) That thing you just said? To yourself? That thing? The lunch demon heard that.

5) You will, when you die, find the lunch demon waiting for you at the gates of Hell. And you will feel an all-over itch.

I am sleeping the rest of the time.

On Earth As It Is is sort of finally here.
Posted by The Man Who Couldn't Blog at 4:44 PM 1 comment:

Email ThisBlogThis!Share to TwitterShare to FacebookShare to Pinterest
Labels: lunch demons, on earth as it is, readings
Newer Posts Older Posts Home
Subscribe to: Posts (Atom)