What I like best about this patent is that it is clearly (if one is to assume that the accompanying image as clarification) it is meant to deter the Suicide Hippie. 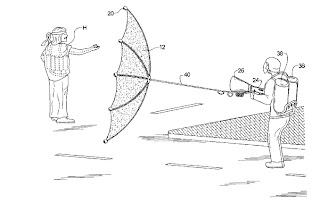 But, once again, an inventor has seen fit to return us to the great threat of the Suicide Hippie.

Look at him: the Suicide Hippie with his devil may care moustache.

Look at him: the Suicide Hippie with his wild, flowing headband.

Look at him: the Suicide Hippie with his hand outstretched in a false gesture of peace-making while his other hand sits in his pocket, switching between grips on his detonator and his libertine sexual organ.

Look at him: the Suicide Hippie preparing to make our lives all "groovy gravy" as he blows a split in our spines that will leave us permanently wheelchair bound.

Just look at him.

But do not fear him. He will be caught. 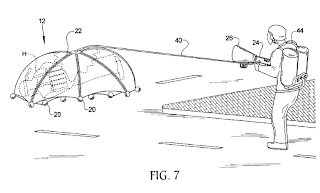 The Suicide Hippie is powerless in the face of "innovation."

I have linked to this before. Watch it again. It gets better and better.

Also Shane Jones introduced me to Little Robot.
Posted by The Man Who Couldn't Blog at 2:15 PM 1 comment:

How was the run?

Good, I think. I ran more of it than I expected to run. (I am, recently, out of shape.)

I was a little late, and unable to break away from the pack this time, so the view from the top of the viaduct was obscured by the many bodies of my fellow runners.

The following songs appeared on my iPod during the run:

During much of the run, I was behind a woman with a very nice right arm. It was covered in tattoos. A sleeve of tattoos. She had a blond ponytail. Dyed blond, it looked like. She was wearing a pink, anti-breast cancer t-shirt. She stopped to walk fewer times than I did.

Also, at one point I passed a man in a Race for the Cure volunteer t-shirt. He was wearing long khaki pants. He was older, had graying hair. He was running very, very slowly. Running as fast as I usually walk. He was heavy-set. It looked like his knees were stiff. He was covered in sweat, too. His light blue shirt was almost entirely dark blue. I felt bad about the times I had stopped to walk short sections of the race when I saw him. I decided that he had run the entire thing, even though he wasn't in very good shape. And wasn't really wearing proper "running gear."

The run had an entirely shocking laxative effect on me, and I had to find a place to resolve the issue moments after finishing the race. I was sort of emotional—as I tend to get during a run—and then, also, in addition to that fragility, I had this other sense of physical fragility, this other not-at-all complimentary body-born need. In this state, I was handed a bag from Swedish Medical Center, full of the hospital's promotional materials.

In any other state, I think I would have ignored the people handing out the bag. In this state, though, I was particularly easy to influence. I imagine if I had been at home, and telemarketers had caught me in this moment, I would have changed my long distance phone service.

(The bag contained a package of Swedish Fish. I ate them.)

On Friday, my band Fire in My Bag will be playing a long, quiet/loud/quiet set at a place called the School of Visual Concepts. We will be making a live audio collage for an art show. The show has a theme. The theme is "Slippery Reality." We will make noise appropriate to that theme.

It will be sort of like, but not as good as, an episode of Over the Edge.

Wine and food while it lasts.

Tonight, my friend Michael will be doing stand-up comedy at The Sunset Tavern.

He's also in a band called The Way It Is. There is a link to the right. 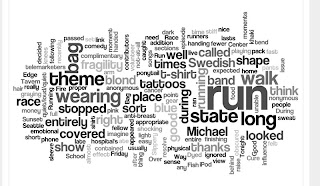 I enjoy Wordle, apparently. I used Wordle to make a Creation Stories t-shirt. The words are from the text of reviews people have given Creation Stories on GoodReads.
Posted by The Man Who Couldn't Blog at 10:47 AM 2 comments:

Last night, some friends and I went to dinner with a new novelist and editor. A nice guy. A funny book.

At some point in the evening, said writer and editor brought up the Charles Schulz biography, and everyone started talking about Peanuts. We talked about Schulz, and Peanuts, and the strips impact, and its themes. And the way Schulz approached it. Its tone. His tremendous sadness. His certainty of his talent.

And I realized that we were suddenly having this really interesting, really high level, really engaging conversation, and that everyone at the table was involved in it.

Sure, at a party, you and some people can be sitting around, and someone can come up with a topic. Then, what, maybe 50% of the people around can join in the conversation. And the others will sit and listen and learn. Maybe 75%, sometimes?

Have to figure it out. Later, blog.

Oh, boy. This is where all the ghosts look in the window at me.

This is it. The window for ghosts. The place the ghosts look in when they want to spy. To Tom Peep. This is the window. This window in my bedroom.

The ghosts, they like to look in through this bedroom window when they all want to spy on me.

And they want to spy on me.

Know why? Know why?

I have, frankly, tried to make my life more boring to ghosts. I do all I can. I spend hours in front of the TV. I eat nothing but hunks of bread, and bits of cheese, and peanut butter. I sometimes play Katamari Damacy from sun-up to sun-down.

And yet, the ghosts, they stay and they watch and they won't leave my window.

And yet, they watch.

They are watching me right now. Can't blog. Must be much much more boring.

Les Thugs were something else. This video features a scene where they are running on a beach. Like The Monkees might. (Play loud.)
Posted by The Man Who Couldn't Blog at 3:59 PM 2 comments:

Today I will review things. I don't usually do that here.

I don't usually do anything here. I can't blog.

But today I will make a concerted effort to do so. So I can do some reviews.

I think it's great that the lead singer of Iron Maiden got his pilot's license and might someday be the guy who gets on the intercom and says: "Well, folks. We're going to be stuck on the tarmac for another hour. While we wait, I'm going to sing a little 'Bring Your Daughter to the Slaughter.'"

Next, I would like to review Mason and Dixon and Gravity's Rainbow by Chris Killen and Shane Jones.

In the book, a haiku dreams about one day becoming a an epic novel. It is, metonyminously speaking, the book itself.

That's not a dig. The book does not try to be something it's not. It is a series of beautiful little short pieces. And they, fundamentally, tiny wonders that in their secret depth, aspire to something larger. Hence, the names of the book. Short poems as grand, epic novels.

In other words, great work guys.

Last night, I went to see Caroliner at a little place in Seattle. Here's a review that:

Seeing Caroliner was exactly like seeing every band I have ever seen live, and every painting I have ever looked at, and every film I have ever watched, all at once. In a tiny room. With a bunch of people watching, too.

A while back, I reviewed the movie Old Joy for Hobart's blog.

I don't think I did much of a job as a blog-centered reviewer. I apologize. I'll try again, maybe someday. I'll practice. And then maybe I'll review. And blog.
Posted by The Man Who Couldn't Blog at 12:51 PM No comments: