I used to sit at a desk waiting for people to call me and order plastic stuff.

I had a little script I read from. I asked people how to spell their names. I took credit card info.

I did almost all of it without any conscious involvement with what I was doing. I did this job for months and months and I worked long days. Lots of overtime. Lots of staring straight ahead.

For the next few weeks, I'm going to share some of the drawings.

This week, I'll show you the comic strip I made. It's called Leadfoot Louie's further Adventures in Pomona.

I have never been to Pomona.

I don't have a car, but when I did, I liked to drive too fast.

My skills as an artist are poor.

But what the heck. 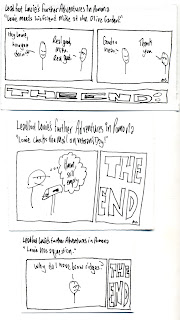 Posted by The Man Who Couldn't Blog at 11:50 AM No comments:

My blog post for this week is missing. I had it in a drawer.

I left it in a drawer. It was there waiting for me. On a torn slip of yellow, college-ruled paper.

And now it's gone.

So my blog post is missing. Have you seen it?

Here is a blog you can read.
Posted by The Man Who Couldn't Blog at 10:36 AM No comments:

When I died, I knew that what I wanted was to come back big. Big. When I was alive the last time, I was a simple beat reporter at a New England newspaper. I was unthrillingly married. I had two nice, unspectacular children. I was boring and I was small. So, I had this nonspecific desire to come back around as something big. And, I did it; this time through I’m something with some real size. I’m, in fact, one of the largest living organisms on the whole planet. I’m Armillaria mellea, the honey mushroom. I’m a giant fungus, living under most of an island.

Here’s a lesson: be specific.

This mushroom that’s now me has been here for a thousand or two years, and I’ve only recently moved in, its life-wise. I don’t know whom, or if anyone, vacated it. It seemed in comfortable shape when I arrived.

I’ve lived quietly beneath my island, sending little mushroom clumps popping out here and there, for a long, quiet time. Mostly, a long, quiet time. There have been incidents: disappointing incidents. There were once herds of sheep on my island, but they aren’t here anymore. They were gentle, well-behaved neighbors, and I loved to feel them graze slowly above me. They comforted me, as much as a mushroom can be comforted.

I have trouble talking about my old sheep—though they were their own and not so much mine, I like to think of them that way—so please forgive me for only giving them a line or three. That’s how it can be when you lose something you love very much, something that means things to you. It’s all you can do at first to stop yourself from going on and on. And then, you don’t have it in you anymore.

I’ve had a long time to talk about them. I’ve used up my words. I’ve used them up railing against the little things I live with now.

A plane flew overhead and dropped bombs filled with the little bastards, one day unexpected; one day warningless. They weren’t your exploding-in-a-shock-of-fire-and-noise bombs, but a puffy-cloud-of-something bombs. Something-powdery-scatters-the-ground bombs. It covered the grass. It seeped into the dirt. It blew up the noses of the sheep as they grazed. It covered them with lesions. It filled their lungs. It made them sick, these powdery things, these particles of white.

Men came in rubber gear, face-masked. They cut up the sheep, sick and dead. And they burned the vegetation from my island’s surface. The little bastards escaped, buried themselves a few inches down to avoid the orange blaze and billowing smoke. The island stayed black for months.

I gave them a chance. I ate meat in a few former lives. I rot the occasional tree. I was willing to make nice with the new neighbor. But it was they who would not deign to make nice back.

It’s been years, and we never speak. The plants have come back, but the animals will not. Signs warn visitors away from our home, and it’s not because of me. It’s my roommates who are to blame. They scare people, and they won’t leave.

It is lonely. Like, the other day it occurred to me that even though I had hoped to come back big, and had, in the grand cosmic scheme, I’ll still always be small. I could send out my body in all directions, maybe encircle the world, a few feet below the surface, but the vast universe would still laugh it off. “Little mushroom planet,” it would say if it were given voice.

Try talking to anthrax about that. They never listen.

I think next time I’ll want to come back tall. Or handsome. Or completely free.

Try talking to anthrax about your desires. Go ahead.
Posted by The Man Who Couldn't Blog at 9:58 PM 1 comment:

This week, I open up The Man Who Couldn't Blog mailbag to answer a question.

I am good at answering questions, I think. I am a person with more than thirty years experience being alive, and am happy to offer the benefit of my—I admit, limited—experience.

Here's a letter I received:

It's Not Cold In Here

I imagine that it has been a long time since you have felt that sensation. I know it has been a long time for me. Years, in fact. This is common for contemporary executive-class human beings—this absence of the sensation of "cold." And "heat," too. You probably have also forgotten what it is like to feel "hot." That sensation is sort of the opposite of the one you are feeling now.

Living within a sealed glass tube filled with a synthetic amniotic fluid kept at our precise body temperature, as people like you and I do, we forget what differences in that temperature are like. This is the trade-off. We work faster. We miss out on sensory inputs when we don't specifically ask for them.

Please apologize to your assistant. And remove him or her from the punishment cubicle.

Please buy Mike Topp's new book, Shorts Are Wrong. It's very good.
Posted by The Man Who Couldn't Blog at 11:45 AM 2 comments: