Here are some contest entries. You still have five or so days to enter the pinball contest.

First, this would be my entry, if I could enter. I, however, am not eligible. 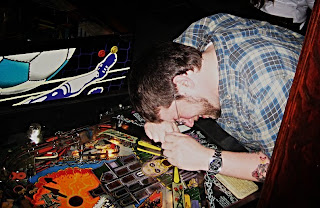 Next, one from Ken Baumann that makes him look like a member of Shields and Yarnell. 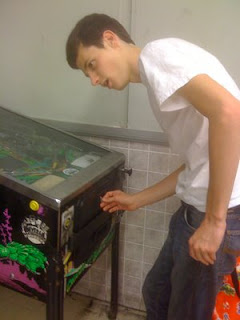 Here's a fine entry from Sabra Embury. She also sent a video. 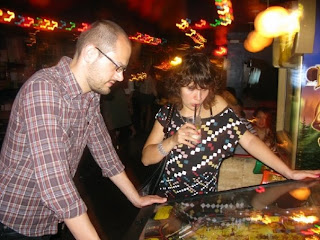 Finally, here's an entry from my friend Amy. 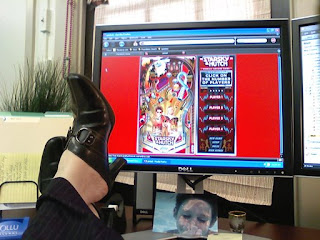 Entries are for this contest. The prize is a hardcover copy of my novella, A Jello Horse. 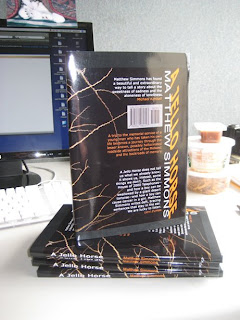 Each entry has been given a number. The number corresponds to the number of chances (slips of paper with the entrant's name on it) that the entrant has to win. Everyone gets one for entering. Additional chances are subjectively assigned based on how much I like the image. (Or song. Three people have submitted covers of Lonnie Irving's song Pinball Machine.)

And just so you know the extent of the competition, this is the entry from my friend Eli, who is mentioned in the original post about this contest. 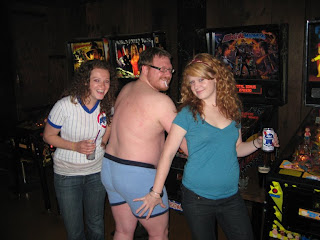 Eli does not fuck around, people. Eli came to play.
Posted by The Man Who Couldn't Blog at 9:49 AM 8 comments:

Email ThisBlogThis!Share to TwitterShare to FacebookShare to Pinterest
Labels: a jello horse, pinball, the importance of spelling sabra's name right

I love this song. Here's to you, readers:

Back from Ann Arbor. Some things I learned.

• Elizabeth Ellen and Aaron Burch live in a house that is almost exactly like Pee Wee's Playhouse except it also has lots of bourbon and a really fine collection of books. The furniture talks. The secret word is almost always: Keystone Light, Barry? (Actually, that's a phrase. But you are supposed to scream when someone says it.)

• Blake Butler ejaculates words all over you when you meet him. And then he sits down and also does so all over himself. And sometimes he sings Tom's Diner. Also, Blake is taller than I think he is.

• Mike Alber's favorite fast food place is Long John Silvers. And yet he is married and she seems completely normal and together. She (Julie) spent much of her time getting people to all walk in the right direction.

• Barry Graham prefers to read by the light of a Golden Tee video game machine.

• Bud Light cans a Bud Light and Clamato juice beverage. If you find one in a store, buy it and send it to Adam Robinson.

• Mary Miller's southern accent kind of makes me swoon a lot. She'd say things and I would sort of feel a little faint. I'd have to steady myself on tables.

• There exists in Ohio a person named Benji. He seems nice.

• Jensen Whelan doesn't know how to properly pronounce his own last name.

• Sam Pink just appears places, as if by magic. Sam Pink is probably magic. I'm pretty sure. But, yeah.

• I told the pizza guy he could come in the house and wait a minute while we got his money, but the pizza guy preferred to stand outside, and then I told the pizza guy that the people inside were nice and none of us would pull his pants down and make light of his genitalia, but still even though I assured him of that, he still wouldn't come in.

• Sean will have a side of sausage gravy with his steak and eggs, thank you.

• Dan Wickett was there. I forgot to mention that. Thing is, everything sort of orbited around Dan Wickett. Like the sun. Dan Wickett is almost exactly like the sun, and sometimes in the shuffle, we forget that were are all just enjoying the benefits of all the things the sun does for us.

• I guess I snore pretty loud.

• All the folks mentioned above are amazing.

Readings this summer still yet to happen. You could maybe attend:

June 15 or 16 @ somewhere with a pinball machine or two. Sponsored by my employer, University Book Store. I will likely give out a hardcover at this reading to the person who gets the highest score at pinball that night.

I will try to read something different each time.

In August I will be teaching a seminar at the Richard Hugo House.

The Voices of Anxious Objects

The age-old dilemma for a writer: how do you say something about a character without coming right out and just saying it? There are many options. We will discuss a sometimes forgotten method of character building in fiction—the use of inanimate objects. Examining the technique of close observation of objects in four writers (Nicholson Baker, Lydia Davis, Ryan Boudinot, and, just for the heck of it, Proust) we’ll discuss the benefits of things as fetishes, totems and mirrors—and practice using these objects or others to build characters of our own. Writers will leave with a new tool for bringing characters to life.

It costs $95 to sign up for it. Right now, the introduction to the class begins with kinds of lettuce and then some of Moby-Dick. And then all that stuff above.

The book is selling well. Thank you to everyone who has purchased a copy. Add it on Goodreads, maybe?
Posted by The Man Who Couldn't Blog at 10:50 AM 8 comments:

In the middle of Kansas, there's this place called The Garden of Eden. It's in Lucas, Kansas. The town has a population under 500 people.

I like people like that. Obsessed outsiders with something to say but imprecise ways of saying it. Grotto builders. Tower builders. Prophets with a little bit of P.T. Barnum in them.

My friend Dan and I took a trip to the Garden of Eden. Here's photographic proof. 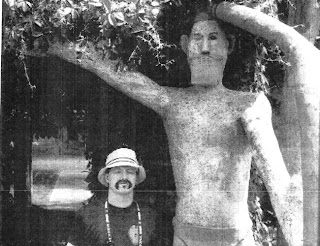 At the time, Dan had a zine called Blipvert. He produced an issue about our trip. I helped. It was the sixth issue of the zine.

The old digital files are gone, but Dan kindly scanned the issue. I will be printing a copy or two, and adding them to the pinball contest prizes.

The Garden of Eden
my old band, the nurses
ducks and decorated sheds
the movie WAX: or the discovery of television among the bees
the Dickeyville Grotto
a song about a skinhead who moved to Arizona

Getting ready for my trip to Ann Arbor. So I'm updating on a Tuesday.

Seven entries in the pinball contest so far. Here's an example so you can get a sense of the scoring. 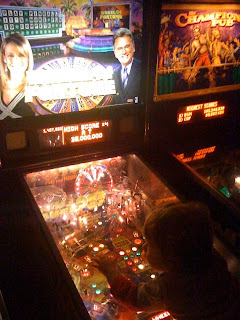 That's Gene Morgan's son playing Wheel of Fortune pinball. One point for entering—everyone gets that. One point for the camp value of the machine. One point for getting a child into a bar. Three points total. Pretty good.

The lottery will run like this: Gene's name will be in the pot three times.

John Synco sent me an mp3 of himself and a friend playing Lonnie Irving's "Pinball Machine." It's rad and he's getting a bunch of points for it. He even did the spoken word opening. For the record, John Synco rules. Recognize.

A Jello Horse is on Goodreads. If you're into that sort of thing. (I am.)

How the book became a book here.
Posted by The Man Who Couldn't Blog at 11:26 AM 1 comment: 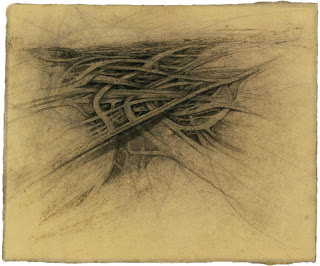 That's called Contagion. It's a piece done in charcoal and polyurethane on paper. I found it in an issue of New American Paintings in 2006, and kept it in a file folder. When I wrote A Jello Horse, I looked at it a lot.

The artist is Brian S. Campbell who, like me, was born in Columbus, Ohio. In his artist's statement, he said:

"Through the phenomenon of charcoal and erasure, I apply the architectural fantasies of the Renaissance at the corpuscular level. The drawn epic scenes of perspectival ribbons are highway overpasses and passageways, as well as arteries and veins. The frenzied circuitry is equivalently an excerpt of the internal landscape as it is external."

Please check out more if his work HERE.

Image was used with the artist's permission. He's a nice chap.

A Jello Horse is a road book. But I hope that, like with Brian's work, the journey is both external and internal. Macro and micro. At the center of the book, I think it leaves Midwestern highways and makes its way into the backroads of the subconscious mind.

Now available on Everyday Genius, an excerpt from the book that helps explain the telephones on the book's cover.

Don't forget to send me pinball images. You still have plenty of time to enter the contest to win a hardcover version of the book.

The hardcover will be produced by Lulu. I understand there are sometimes kerning issues with Lulu. I apologize in advance if sometimes there is extra space between a couple of the letters in the book.

A story of mine about a couple who have run away from society with a stolen mastiff to await the Rapture in a cabin in Upper Michigan will be in the next Keyhole.

I'm really happy about placing this one, as I've always liked it and wanted to find it a home.
Posted by The Man Who Couldn't Blog at 12:49 PM 4 comments: