Some people come to me and ask, Man Who Couldn't Blog, who should I vote for?

I tell them: Man Who Couldn't Blog is not actually my name. Sorry. It's actually just the name of this blog, and a sort of title of mine. I would prefer it, though, if you would address me in a much less formal way. I really would. It seems odd to me, in fact, that as long as we've known each other, you feel like you need to call me Man Who Couldn't Blog, instead of calling me by my name. I wonder, really, why you think you need to do that. Have I done something that makes you think you need to call me that instead of my name? Me? Is it something I said to you? Did I say something to offend you, or make you think that I was offended by something you said? Did I treat you in a formal manner that made you think I wanted you to reciprocate? Are we having a problem, the two of us? Do we need to sit down and talk about it? Over a cup of coffee? A beer? Is it the drinking? Do you think you need to talk to me very seriously about my drinking? Was I a little tipsy when I said the thing to you that made you think you needed to address me formally? Is this where our "thing" started? Do I need to track back through the way I've been acting lately? The nights recently? The drinks I've had? The time I've spent? Is that it? Is that why you don't feel comfortable using my name? I'm really sorry you feel that way.

And Obama. Hillary is running on the fact that she's the more cynical of the two candidates. Obama.

That's a rat turning into a purse and then turning back into a rat. 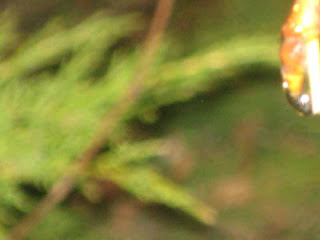 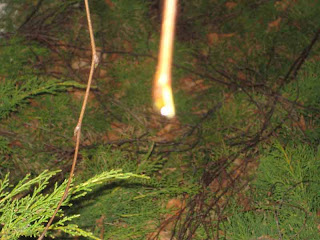 Second, 4 minutes with The Residents.
Posted by The Man Who Couldn't Blog at 11:25 AM No comments:

I have a new story on pineapplewar. It is a story I wrote in response to a couple of short prose things Blake Butler wrote.

I think my apartment has mice. I think so, but I don't know for sure.

Yesterday when I came home from work, my trash can was tipped over, and their was garbage scattered all through the kitchen. My cat was hiding under the bed.

And sometimes I think I hear a tiny squeaking noise when I'm trying to sleep. I hear it in the wall. And a tiny scratching sound.

And often when I come home, there are thick, deep claw marks in the plaster.

I think my apartment has mice. I think so, but I can't say for sure.

The day before yesterday, my bookshelf was torn down, and my books were ripped to shreds and scattered through the living room. My cat was hiding in the closet, up on the shelf and way in the back. My clothes had been torn down.

And sometimes I think I hear them scuffling around in the attic, ripping apart what sounds like a raccoon.

I go up to the attic, but I never see them.

The day before the day before yesterday, I came home and found all my windows and screens torn open. My cat was on the ground, torn up.

I went out and got another cat.

Mice. I think my apartment has mice.

Also, Andy Warhol has a burger.

Email ThisBlogThis!Share to TwitterShare to FacebookShare to Pinterest
Labels: Themes and Motifs from Pulp Sci-Fi Project

This is an owl. And carrots.

When we were growing up, my mom had lots of owls. Hundreds. All sorts. Wood. Glass.

We had a little wind-up one, too. Just like this one.

Someone found this for me at a garage sale, and she bought it for me.

There's also this video of me making "paperback" copies of my chapbook, Creation Stories:

I was practicing. This means that I have copies of my chapbook now. I'll make you one if you want. Drop me a line at my email address, which should be up in my description.

One more video, too. This is a video I made for a song I recorded with Tao Lin for our band Sad Bear vs. Happy Cobra:

That's it for recent video production.

Too busy doing it to blog.
Posted by The Man Who Couldn't Blog at 11:26 PM No comments:

Sometime I stop drinking for a while. It's just that it feels like the thing to do, so I do it.

It's good, sometimes, to do that, don't you think?

And when I stop drinking for a while, I start, instead, to do some running.

And when I stop drinking for a while, I start, instead, to crave peaches.

I go out running three, maybe four nights a week. I start with just a couple of miles a night.

And then a couple more.

And in the fridge, I try to keep peaches.

Instead, you just listen to music, and look east and west at the mountains. you travel in your head, just like when your driving a car.

When I get to seven miles, something happens at mile six. I start to want to cry. I never really do. I never actually have tears come out, but I'm overwhelmed with this need to cry. And I don't know why.

And that's when I get to finish up the last mile and really enjoy a peach.

I cut my peaches in half. And then in quarters.

I tend to hold the peach up and inhale before I eat it. I just smell it.

I eat the peach very slowly.

And it occurs to me, somehow, why I felt like crying. While I eat the peach, my desire to cry while running becomes plain, and open, and sensible, and clear. It's nice.

It's nice to understand, entirely, the weird way brain chemicals fuck with ones emotions.

When I finish the peach, though, I forget what I just understood.

All that clarity disappears.

Leaves me unable to do all sorts of things. Blog, for instance.

I made a video for the band Tao Lin and I are in, Sad Bear vs. Happy Cobra.

Go see a Creation Stories video, too.
Posted by The Man Who Couldn't Blog at 11:05 PM 1 comment: